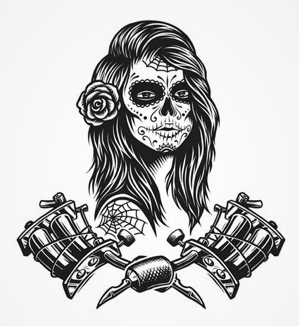 It had seemed like money for jam; a foolproof way to make money in the Cross. At least, Mutt had thought so because everyone knew what a great tattooist he was; at least in jail, they did.

In jail, Mutt had been much sought after as a tattooist; albeit with a needle and some ink crudely rubbed in. Still, Mutt had made some of those really ugly thugs look like walls of beautiful rustic art; at least he thought so and no one had argued with him.

Phil wasn’t so sure. The Cross had changed in the 10 years that he and Mutt had been away, it had a gloss on it that made Phil feel uneasy but Mutt would not be swayed, he’d even found a tattoo gun on eBay for $50 and had been practising on the sides of pork before Sunday lunch roasts for many weeks.

Phil had avoided the crackling but Mutt hadn’t and now his teeth had a decidedly black tint to them, but as he was six foot 4 and a 130 kilos, no one pointed it out to him. Which is probably just as well because Mutt had an sensitive soul thanks to his artistic sensibilities and tended to lash out when offended.

Sweeney had owed them a favour for not ratting him out as the driver of their failed bank heist and so they set up their tattoo business in one of the corners of Sweeney’s Barber Shop. They had started out feeling confident they’d succeed but with all of the smick tattoo parlours dotted up and down the Cross no one was going to get tattooed by a self-taught tattooist with a second hand tattoo gun.

“We need a gimmick,” Phil muttered as they sat outside the shop sipping on Sweeney’s expensive coffee while having a smoke. Apparently, the gratitude Sweeney gave them did not extend to smoking in his shop but  the boys reckoned that was fair enough.

So, they sat and thought hard as the usual parade of colourful Cross inhabitants swanned by.

“Geez, those blokes who dress up as sheilas look great, don’t they?” Commented Mutt. “I wish I could look that good in a dress.”

And that’s when Phil’s genius struck.  With very little convincing, a red dress and some lessons in makeup and hair for Mutt, Phil had found their gimmick.

Six months later, people came from far and wide to see the uncommonly beautiful artist Matilda with black teeth who would sit like a trucker to tell them tales of her life in jail as she happily tattooed them.

And only her partner Phil ever called her Mutt.